What Really Happens to Your Trash

If you’re like most people, you probably put your trash out at the street each week and promptly forget about it. But the story doesn’t end there. Here’s what happens to your trash after you put it out.

Once your trash is in the truck, it is compacted to make it take up less space. All garbage trucks have a big blade inside that can be used to smash the trash down. After being compacted, your trash likely rides around in the truck for a bit until the truck is full or the driver has picked up all stops on the route. Then it’s time for it to be dumped.

Where your trash is dumped depends on where we’re hauling it from. If you live in our Alma, Jackson or Cedar Springs territory, the trash is taken to a transfer station. A transfer station is a temporary holding facility for garbage (and sometimes recyclables that are kept in a separate area) before it moves on to the next stop. Waste we collect in our Cedar Springs service area all goes to Kent County facilities. In our Alma and Jackson territories, however, most trash is taken to our facilities—Disposal Center of Alma or Disposal Center of Jackson—where it is dumped, stored briefly and then loaded onto a transfer trailer to head to Granger’s landfill in Lansing. All trash collected in our greater Lansing or Fowlerville territories goes directly to Granger’s landfill. 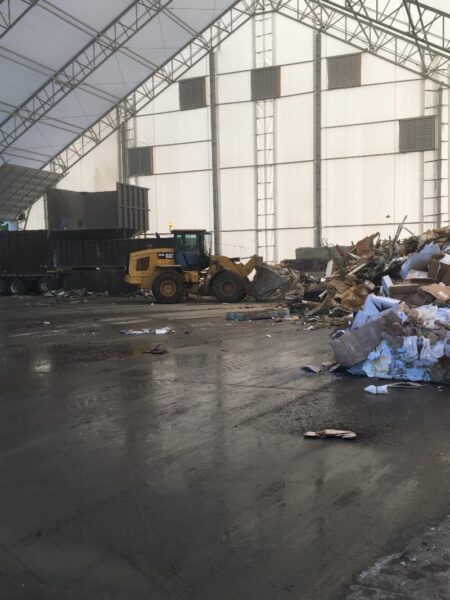 Landfills of today, unlike the dumps of the past, are highly engineered and regulated to make sure they’re safe places to put trash.  (Learn more about landfills at here and here.) At the landfill, trash is dumped in an area called the working face. Then a piece of equipment called a compactor smashes the trash with its huge spiked wheels to compact it even more. At the end of each day, the working face is covered with dirt or with a spray material to secure it overnight. And when that area of the landfill is full, a final cover consisting of many layers will be installed over it to keep the trash inside on a long-term basis. 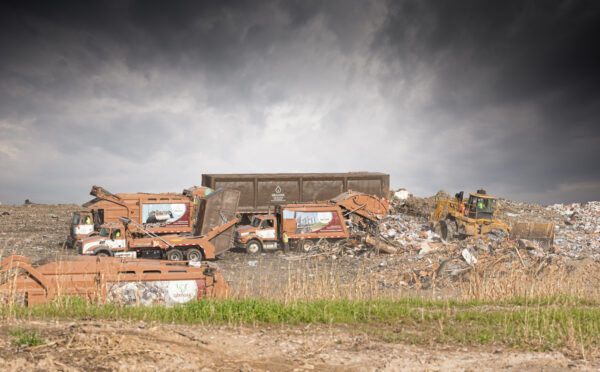 But even after the cover is installed, the story of your trash is not finished. Almost as soon as it is placed in the landfill, and for many, many years after it arrives, trash decomposes. When it goes through the decomposition process, it produces landfill gas. At Granger Waste Services, this gas that comes from your trash goes on to a useful purpose. It is collected using a system of underground pipes and used to make renewable energy. (Learn more about landfill gas to energy here.) What seemed to be waste while it was sitting at your curb turns out not to be waste at all. Instead, it’s made into a valuable resource.

So, the next time you’re putting out your trash, don’t think of it as something that’s come to the end of its useful life. Think of it as taking the first step on a journey to reach a greater purpose.

Current and upcoming weather conditions may cause delays to service for residential customers. If we are unable to service your account this week due to weather or road conditions, we will pick up any extras on your next collection day. Thanks for your patience as we work to service customers while keeping our workers safe.

Service Delays Possible Due to Weather

We are experiencing some challenges servicing our customers north of Grand Rapids and will likely continue to do so with the snow that’s forecasted for later this week. Please be patient with us. If we are unable to service you this week, we’ll be happy to pick up any extras at no charge on your next scheduled service day.

We are currently experiencing problems with our phone system. We are working to get this situation resolved as quickly as possible. If you need to contact us at this time, please do so electronically. We apologize for any inconvenience.

Our Spring Sale Has Started

You can see how this popup was set up in our step-by-step guide: https://wppopupmaker.com/guides/auto-opening-announcement-popups/

We are currently experiencing technical difficulties with our recycling calendars that is prohibiting them from populating correctly. We are working to resolve this issue as quickly as possible.

Please note, you can still go to the page for your community to access your recycling guidelines. Additionally, this issue does not affect the calendars for Kent or Ottawa County, which are in .pdf format.

We apologize for any inconvenience. We appreciate your patience as we work to resolve this issue.

We are currently experiencing technical difficulties with our recycling calendars that is prohibiting them from populating correctly. We are working to resolve this issue as quickly as possible.

Please note, you can still go to the page for your community to access your recycling guidelines. Additionally, this issue does not affect the calendars for Kent or Ottawa County, which are in .pdf format.

We apologize for any inconvenience. We appreciate your patience as we work to resolve this issue.

We are currently having issues with our phone system. We are working to resolve this issue as quickly as possible. We apologize for any inconvenience. If you must contact us at this time, please contact us electronically.

For the safety of our associates, we have suspended collection of bulk items (furniture, appliances, etc.) until further notice. Any bulk pickups already scheduled will be completed, but may be on a different day with a different truck. If you have small appliances to dispose of, you may still set them out for collection as long as they will fit in your cart with the lid closed. Remember, you can still bring these items to one of our Disposal Centers. Visit /self-haul-disposal/ for information, including directions, hours and pricing.

Email Sign Up
Want to stay up-to-date on holiday and weather delays? Sign up to receive our email alerts.

Green Valley Recycling & Disposal is now a part of Granger!

Green Valley’s online bill payment portal is no longer active, while we are transitioning account information to Granger.

If you were going to pay an outstanding bill today, please use one of the alternate payment methods below:

You will be able to register an online account with Granger once you receive your first invoice from us. Thank you for your patience.